This Day 25 Years Ago

This is definitely a different post for me, but today marks 25 years since Operation Gothic Serpent, or what has become known as Blackhawk Down.  This also marks a significant point in my life and one that will remain my thoughts daily for the next 25 years.  I was in the 24th Infantry Division and my company had just assumed the role of immediate ready company and my platoon was immediate ready platoon (kind of an on call status for IT, but has the possibility to become much much more intense).  As part of this immediate ready platoon, we were tasked with being anywhere in the world within 18 hours if needed.  To my knowledge, that day was the first time a mechanized infantry platoon was deployed with that kind of speed.  They always say it helps to talk about things, so I would like to talk about that day from my point of view.

My first memory of that day was around 2AM.  I remember being woken up by my beeper and thinking it was a training alert (there were no cell phones back then 😃).  We had just returned from spending 4 weeks in the field and my assumption was a test.  Leadership was testing their ability to contact everyone.  I figured a simple phone call and I would be back in bed.  I made the phone call and was informed that I needed to be in formation in 30 minutes.  A little upset that they were taking it this far, I got dressed, kissed my wife of 6 months goodby, and told her I would be back soon.

When I arrived at work I saw the look on people’s faces.  Serious, scared, anxious.  These weren’t the faces I’ve seen during routine alerts.  I began hearing of CNN’s reporting on the events happening in Mogadishu.  This was quickly turning into the day I totally wasn’t expecting.  Shortly after I had arrived we were told we needed to draw weapons before formation.  I remember that pit in my stomach, knowing where I was heading and knowing that I would be leaving my wife, who had only lived in the area for 5 weeks, behind.  I hadn’t said goodby to her and prayed that I would be able to at some point before we left.

During formation it was confirmed that we were being deployed to Somalia.  3rd PLT 3/15 INF (which was my platoon) would be the immediate ready platoon and were to head over to the gym where we would receive our shots, have wills drawn up or any other legal needs.  If you haven’t experienced the vaccine process, it’s like an assembly line.  Going from station to station until you eventually reach the end.

The next few hours are kind of vague.  I believe a lot of it was hurry up and wait, but they were probably dealing with some logistical issues.  At any rate, my squad leader allowed me to go home for a few minutes so I could let my wife know what was going on.  While I was at home I was also able to call my parents and let them know too.  I really appreciated that I was able see her and talk to her.  Soon I had to head back though.  I knew the busses would be arriving that would take us to Hunter Army Airfield where our gear and vehicles were prestaged.  The hardest thing in my life was saying good by.  Scared for her because she would be alone in a place she didn’t know.  Wondering if I would ever see her again and knowing she was thinking the same thing.  Finally turning and walking away was absolutely heart wrenching for me.

Soon the busses did show up.  We all boarded and made the way from Ft. Stewart to Savannah.  I watched the cars out of the window and the people walking around.  I thought about how different our lives were at that point in time.  They were headed to the park and I had no idea what I was heading to.  They could plan the rest of their day and I wasn’t sure what I could plan.  It was ok though.  I had been in Desert Storm and knew that it could happen at any time again.  There would have been no way that I would not have gone.  That’s not what we do.  Arriving at Hunter Army Airfield I saw the 2 C5 Galaxies that would take us on our journey.  The Bradleys hadn’t been loaded yet, but they soon would be and we would be on our way.

From the busses we moved to some underground barracks where we were distributed ammo.  Once our magazines were loaded we moved to the range where we had the opportunity to zero our weapons.  This is the one time you want to make sure it’s dead on (pun intended).

Soon we were able to board the plane.  If you’ve never been in one of these, it’s hard to explain how big they are.  The seating is above the cargo area and holds about 40 people.  There is one window seat and everyone faces backwards.  I was the lucky one and had the window seat. It kept me occupied during the trip, even if I was only looking at water much of the time.  I couldn’t sleep and it was good to have something to do.  As we got closer we had people go down to the cargo area where 2 of the 4 Bradleys were.  They loaded the 25mm chain gun as well as missiles into to launcher.  I don’t believe anyone knew what to expect when we landed and the nose of the plane opened up.  I can tell you that nobody wanted to be caught off guard though.

The flight was many many hours.  As we got closer to landing you could see the focus of people change.  It went from talking and joking around to determination and anticipation.  It was time to do the job we were sent to do.  Whatever that may turn out to be.  I would spend the next 5 months in Somalia.

My experience that day is different than many because I deployed in response to those events.  Please remember those that were there and gave everything they had for their brothers.

This picture was taken late Oct '93 just outside what would become Victory Base.  Was home for a few weeks for my platoon. 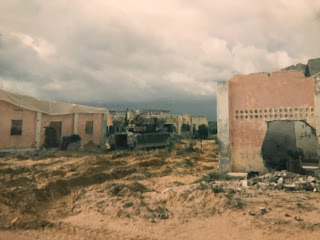