A Few of My Favorite Things - Continued

In my last post I talked a lot about how I think about finding bad guys.  From creating mind maps of the things I should be looking for to the need for moving beyond simple IOC based detection and into more of a dynamic environment where alerts are clusters of events that are linked by time, source / destination / user.  I also described a simple scenario of the actions that an attacker could take to dump credentials on a host and how those actions would map across the needs of an adversary.  In this post I want to focus less on the thinking aspect and more on the doing.
To recap the scenario from my last post:

The above actions taken by the attacker would fall into the maps under the following:


The following are the commands that were executed:

Based on the above command sequence, what are some questions that you would ask as a result?

Below are the contents of bad.bat and the same question applies.  What are some of the things you could key off of in order to possibly build some detection?

This is good.  We have several things that we can go after to begin to build out some behavioral based detection.  As we start creating queries for the above, keep in mind that you may need to use multiple log sources.  If this is the case do yourself a favor and try to normalize the fields.  It’s much easier to pivot and correlate across log sources when the fields are the same.

The obvious next step in our process would be to start building the queries out, but before we begin with that we need to understand our infrastructure, how these queries may perform and if there will be any impact as a result of scheduling these to run regularly.  I have had the displeasure of working on some systems in the past where the query would have taken longer to run than the needed time span in scheduling.  If this is the case, is there anything you can do to streamline your searches?  Strictly speaking about Splunk, there is a method to create data models from log sourcetypes.  The result of this is a dramatic increase of speed when building complex queries that look across large amounts of data.  It may be worth investigating the tool you are working with to see if there is a similar option.

For these examples I’m using Windows event logs and Sysmon logs because that is what I have logging in my lab.  I know that company logging policies and standards are all over the place or even non existent.  Detection and logging tools are different.  These examples won’t match what your environment looks like.  The trick is to determine what you can detect with the log sources and the tools you have available.  Detection and hunting is not easy.  Know your tools as well as your data and be creative in how you go about hunting for bad guys.  It’s an art!

I know that not everyone who will be reading this is a Splunk user, so I'm including key items that you can look for in your logs, but not the specific queries.  If there is enough people asking I may include them in a separate blog post.

As adversaries move around your network they will often use builtin windows tools for this, such as “net” commands.  These commands will generate a 4624 Type 3 network logon.  Attackers will also likely stray from normal logon patterns within your environment.  Logon times, users and src/dest combinations may look different.  By looking for rare combinations where there is a remote IP address you may be able to reduce some of the noise while still identifying those events that should be investigated.

If you have command line process audit logging within your environment it may be useful to determine how your admins administer remote machines.  Do they typically connect to them by IP address or hostname.  By knowing what is normal within your network, it is much easier to develop queries that will surface the abnormal.

Using windows shares is an easy way for an attacker to move data around.  Whether it’s tools that have been brought in, or data intended for exfiltration.  Pay attention to machines and users accessing hidden shares.  Is this a rare occurrence for this machine/user or combination of both?  Also pay attention to the process responsible for accessing the share and what the action is.

This goes along with knowing your environment.  Is it normal for powershell to invoke a web request?  If the answer is yes, are the destinations unique?  By looking for unique destinations that were the result of powershell invoking a web request you have a high likelihood of spotting a malicious command.

Similar to the $ share behavior.  Whether it’s tools that have been brought in, or data intended for exfiltration.  Pay attention to machines and users accessing hidden shares and the data that is passed between them.  Is this a rare occurrence for this machine/user or combination of both?

Similar to the $ share behavior.  Whether it’s tools that have been brought in, or data intended for exfiltration.  Pay attention to machines and users accessing hidden shares and the data that is passed between them.  Is this a rare occurrence for this machine/user or combination of both?

Execution is an attacker need.  We’ve already said that attackers will often use windows tools when moving laterally within your network and wmic can be a method that an attacker can use to execute commands on a remote machine.  Pay attention to source/dest/user combinations and the processes that are spawned on the remote machine.  This query is intended to identify the processes that are spawned within 1 second of wmiprvse executing on the destination side of the wmic command.  This query will also attempt to identify the source of the wmic connection.

Display source address and all processes spawned in that 1 second span.

Execution is an attacker need.  We’ve already said that attackers will often use windows tools when moving laterally within your network and wmic can be a method that an attacker can use to execute commands on a remote machine.  By monitoring explicit logons you can identify users, machines and processes that were used which resulted in an authentication to a remote machine.  This query watches for processes that may often be used during lateral movement.

Cmd.exe is probably the most executed process by an attacker during KC7.  Monitor child processes and identify those clusters that may be related to malicious execution.

Using windows shares is an easy way for an attacker to move data around.  Whether it’s tools that have been brought in, or data intended for exfiltration.  Pay attention to machines and users accessing hidden shares.  Is this a rare occurrence for this machine/user or combination of both?

Attackers need credentials if they are going to move laterally.  Identifying the potential execution of a credential dumper is important as they can often be missed by AV.  This query looks at the loading of dll’s by process and identifies those that have the clusters often used together by various credential dumping tools.

Our next step would be to begin correlating the results of these queries, but unfortunately with using a Splunk free license, the ability to generate alerts will expire after 30 days.  The alerts are needed in order to log the output of your queries to a separate index from which we would be doing our correlation.  I have previously blogged about using queries such as the above and building correlation around them.  This post can be found here: http://findingbad.blogspot.com/2017/02/hunting-for-chains.html.

The above queries are the building blocks that will be used as part of a more dynamic behavioral based detection methodology.  As you continue to build out and correlate queries based on actions that adversaries take, the more your capability increases in finding previously undetected TTP’s.

I wasn't able to include screenshots of each query as the post, I believe, exceeded the maximum size.  I am including a couple screenshots of the results of the queries though.  If these queries were correlated into a single alert it should paint a pretty good picture that this is very bad. 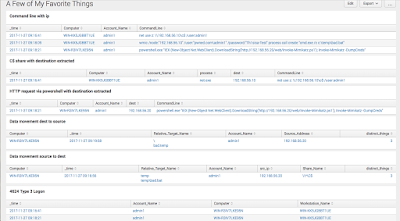